The answers to all of your questions about tuba fingerings and valve systems are here. If you passed algebra in high school then you can understand everything I have to offer. Your comments and suggestions are welcome. You can e-mail me at: ahovey2@gmail.com

3. Intervals and the Equal-Tempered Scale:

4. Tuning the First and Second Valves:

6. The Effect of Temperature Changes on the Tuning of a Brass Instrument:

7. Why Is The Fifth Partial So Flat?

8. How Much Slide Pull is Needed for a Given Change in Pitch?

11. Selecting a Length for the fifth valve tubing:

12. Downloadable Microsoft Excel Spreadsheet: This spreadsheet works for tubas in any key. You can type in any values you like for the valve tubing lengths. (Standard values are given as a starting point.) The spreadsheet calculates the lengths of all the valve combinations, finds the nearest resulting note, tells you how sharp or flat it will be (theoretically) in cents, and how much slide pull will be needed to correct the pitch. For 4-valve instruments click on the tab that says "sheet 1" at the lower left corner. For 5-valve instruments click the "sheet 2" tab. It could easily be altered to work for 6 or more valves. It's self-explanatory, but you can e-mail me if your have questions. If the link above does not work then try clicking here:

14. Links to Other Tuba/Euphonium Websites. . .

15. My FrankenTuba, pictured at the right, backstage at Carnegie Hall...It's a 1927 Martin that my father used for about 60 years. (Scroll down to see his picture.) He bought it from Vincent Bach's brother for $65 back in 1932. We replaced the original recording bell with an upright bell from a Buescher helicon. More recently I grafted a Nirschl valve section onto it. Notice the valve button positions. (For details, see #16, below.)


17. Making a Support for my heavy Frankentuba...

18. My First Project Tuba...
It's a 1920 Buescher helicon that I fixed up in 1967 and have used ever since. I painted it black "to give it a darker tone". A helicon is a wonderful instrument because you can play it one-handed, standing up or even on horseback. It's much less cumbersome than a sousaphone. In 1985 I installed a new Bohm & Meinl valve section; the operation was a success. Dave Gannett recently had a similar instrument restored and lacquered black; we compared them at a recent summer jazz festival.(In this photo he is holding mine and I am holding his. Dave is marveling at the feel of the Bohm & Meinl valves.)


19. My Special Mouthpiece
 Because of the way my teeth grew, I was unable to prevent air from escaping from the sides of my mouthpiece without using a lot of pressure. I began experimenting with "wrap-around rims" many years ago, and found that they enable me to play with much less pressure, making high notes possible. At one time I used even more curvature than this, but I found that it interfered with the low register.
Doug Elliot made this mouthpiece for me. He gave me some extra plastic to work with on the rim, and I sculpted it myself into the shape that I wanted. Doug also made an extra-long shank for me (not pictured here) which was very helpful for one of my tubas.

20. Another Successful Project . . . a beat-up old York from around 1920 with a brand-new dual-bore Mirafone 1271 valve section. The body is very similar to the one-piece King "2341" model; the Mirafone valves are very light and fast. It plays like a dream. The photo is from the Howard Hovey Tuba Day in Sayville, Long Island back in November of 2002. The trombonist is my brother, Bob. I also made an airline flight case for this tuba and have used it successfully on several trips to jazz festivals. 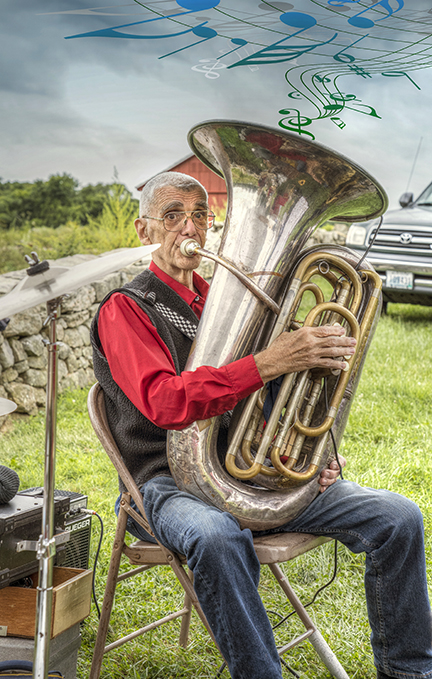 21. Quadra-Gravis Bass Trombone Project:
(Click on the photo at the right for more info.)

22. Inexpensive Fourth Valve Project (Click on the photo at the right for more info.)

28. PACKING A BIG TUBA FOR SHIPMENT

29. PACKING AN OLD KING FOR SHIPMENT

31. GJB 60, "This Old Tuba"... A compilation of Galvanized Jazz Band recordings from 1975 to October 2002 which happened to have tuba solo choruses, including some with Buddy Morrow, Art Baron, and the Les Paul Trio. I put this CD together shortly after my 60th birthday to celebrate the completion of 50 years of playing the tuba. For details, a complete tune list, and downloadable sample tracks please click on the blue lettering above or on the image at the right. To order, send $15 to Fred Vigorito, 20 Ledgeview Lane, Guilford, CT 06437 OR send $15 by PayPal to ahovey2@gmail.com

32. Ragtime CDs by the Neighborhood Music School Faculty Ragtime Ensemble features arrangements by yours truly. For details and a downloadable sample tracks, click on the blue lettering or on the image at the right.

33. My youth band project, called the "Sugarfoot Jazz Band", now has five CD recordings. I am very proud of this band's progress and accomplishments.

34. The annual Long Island Tuba Day on Long Island is usually on the first Friday in November. In 2011 it was November 4, with Oystein Baadsvik as principle guest artist. Other recent guests include Tom Holtz from the "President's Own" U.S. Marine Band, the Heavy Metal Duo of Bob Stewart, Mike Roylance, Patrick Sheridan, and Ray Anderson, and Alan Baer, principal tubist with the New York Philharmonic. 2011 photos: 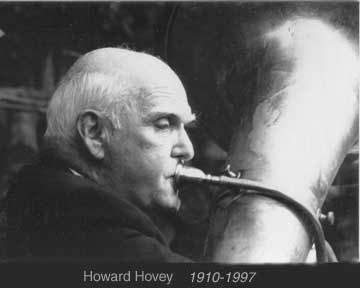