The Conn 20J is a large tuba with three top-action pistons and a recording bell. Although it is a very popular model, I have always found it awkward to hold and tiring to play. Some years ago I had the opportunity to honk on a rare 26J, which has a similar body but with four front-action pistons. That's the configuration which I prefer, and I have been dreaming about that tuba ever since.

I currently have three "Frankentubas" which I like very much and use regularly. They each have old American-made bodies with new German-made piston valve blocks. The bodies cost me nothing, but the valve sections were expensive.

At an Army tuba conference I met the man who imports "MM" tubas from China. One of his display instruments was a large BBb with four front-action pistons arranged in a comfortable arc. (It's the "TU 2000" model, with 20-mm bore; you can see it on his "tubamm.com" website.) The pistons are similar to the ones on big Jupiter tubas, but the tubing is more sensibly arranged. I inquired about purchasing one of those valve sections, but it turned out that his factory was unwilling to sell anything but complete tubas. Eventually I found one of those tubas on Ebay, and managed to snag it for less than what I had paid for a german valve section. The one that I bought had intonation issues, but the valve section is well-made. All four valves have top tuning slides, and the 4th can be pulled more than 8 inches. 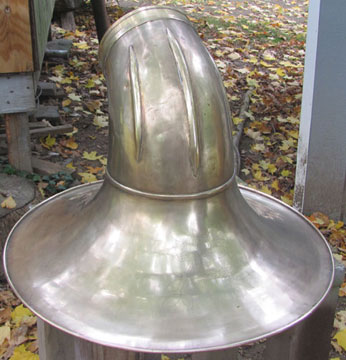 Recently I learned that a friend had an old 20J that he wasn't using. He let me borrow it so I could make some measurements and think about a conversion project. The lacquer had all been removed, and there were no serious dents. I was told that it used to belong to a local bass player who purchased it back in the 1930s. The serial number is 299202; perhaps someone can use that to find out when it was made.

There are three ribs on the back of the bell, and the engraving includes the famous "lady face":

It turned out that the 20J bore is only a millimeter larger than the MM, and it appeared that the MM piston set could just fit inside the inner loops of the 20J body. So I made him an offer and he accepted.

I joined the exit port of the MM valve section to the Conn tuning slide with a short piece of intermediate-size tubing. Then I arranged the Conn dogleg and first bow to fit around the pistons: 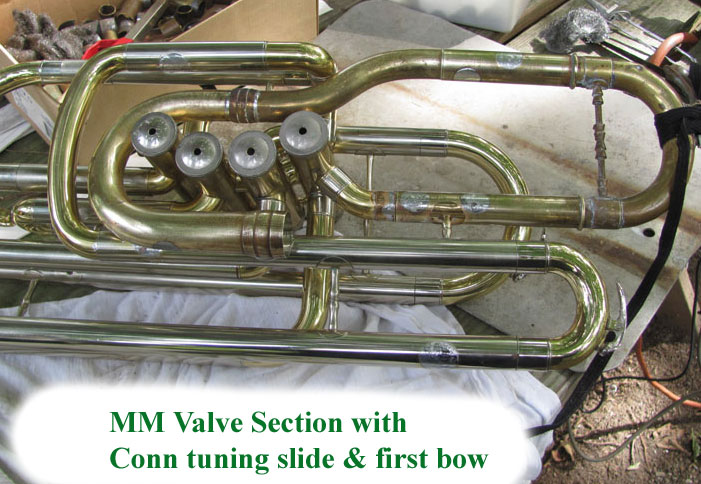 (Later I had to go back and shorten the smaller side of the tuning slide by about an inch.)

I experimented with reassembling the larger tubing until I found a way to configure it for the front-action valve set: 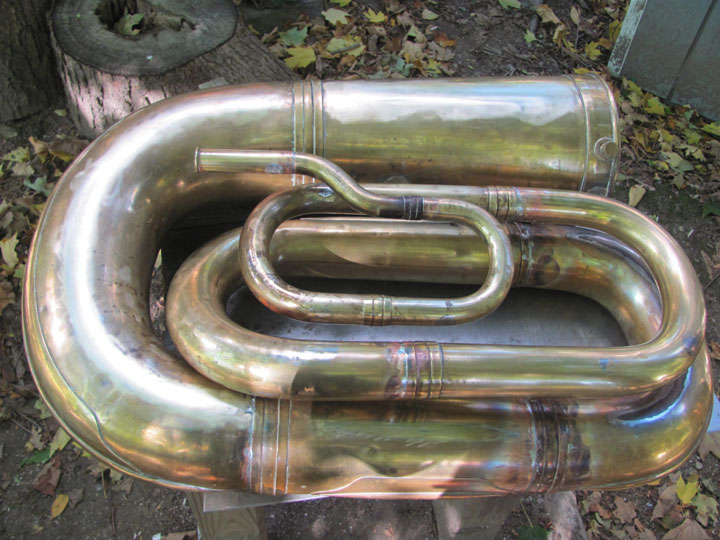 The first rough assembly showed that the valves and mouthpipe would be almost 3 inches too high, so I decided to shorten some joints on the downdraft side. Since the MM leadpipe is a few inches longer than the original Conn leadpipe, that would not be a problem. I used a hacksaw to remove about half an inch from the smaller end of each bow on the downdraft side, used a file to reduce the diameter where it would fit into the ferrule, and used a dremel tool to enlarge the corresponding opening in the ferrule until they fit together snugly: 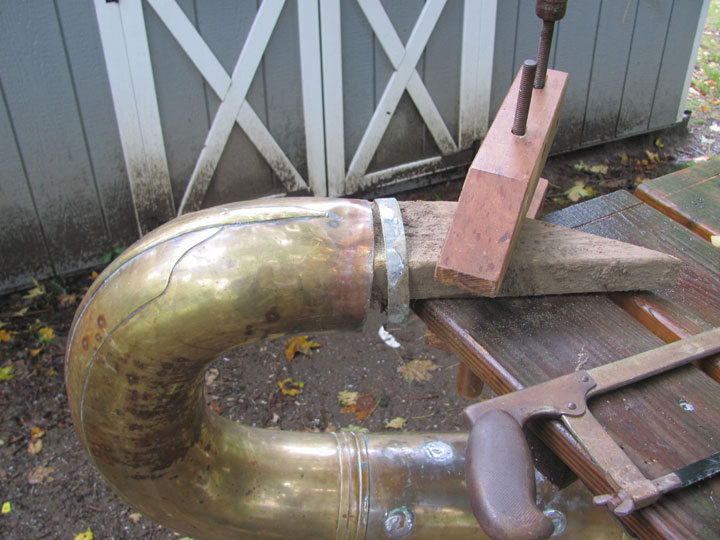 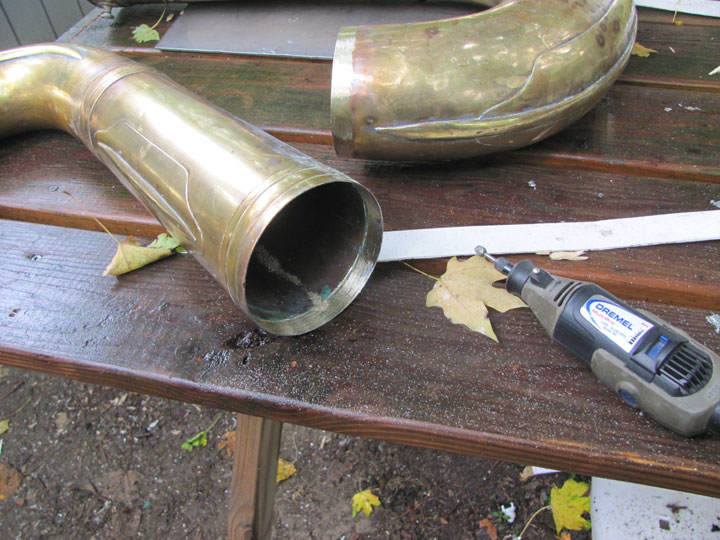 The next step was to solder all the bugle joints and make sure that they were airtight. When I was sure that everything was positioned correctly I mounted the valve section and tuning slide and added braces to hold them in place: 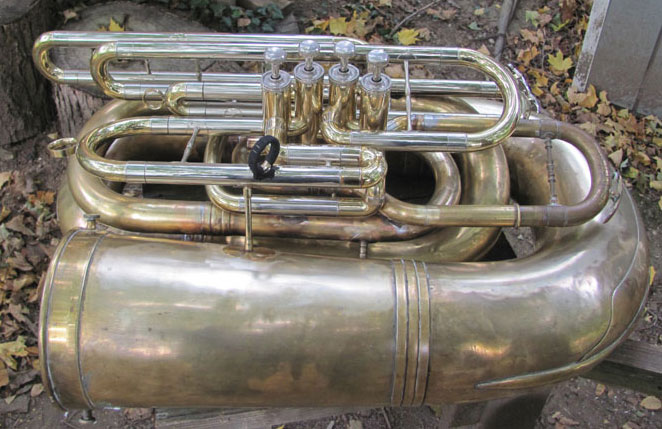 The MM leadpipe is made of "nickel silver" which is usually used only for straight tubing because it is not as malleable as brass. If it were brass or copper I could bend it a little, but I was afraid to try bending this one. I still needed to bring the receiver down some more, so I sawed off about half an inch from the big end of the leadpipe. After a little filing it fit nicely into the entry port of the valve block. I removed the first piston before soldering the leadpipe into the first valve input port, just to be safe. 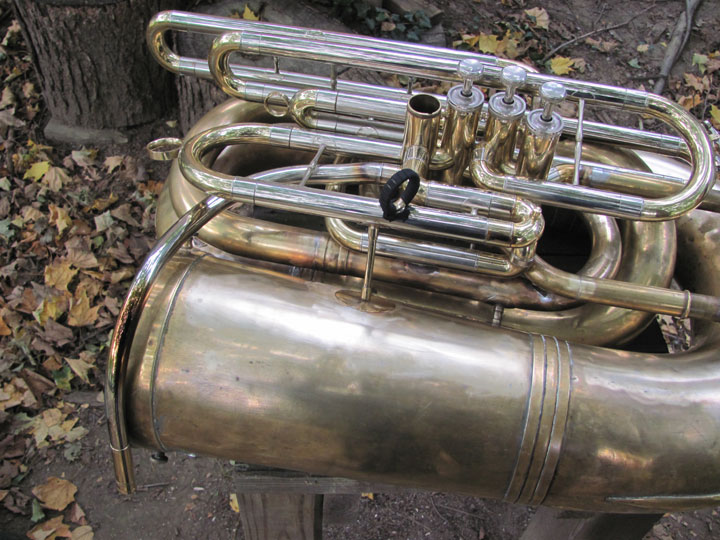 After soldering that joint I tied the middle of the leadpipe onto one of the bell screws with a shoelace so I could test the tuba without putting stress on the first valve casing.

With the bell installed the tuba played a little flat. (At 60 degrees Fahrenheit the middle F could not be lipped up to pitch.) I then shortened the long leg of the main tuning slide by about an inch, making its two legs equal in length. Then I installed two braces on the leadpipe; one near the middle another at the mouthpiece end. When I tested it again the next day the temperature was about 70 degrees. Most of the notes were then pretty close to correct pitch with the main slide pulled out about 7/8". Middle F is still a bit flat (as it is on most 20Js) but alternate fingerings work well. (I recently took it to a band rehearsal and was able to play in tune without alternate fingerings but with some lip. I really like that MM valve section!)

The "5th partial" open D (which tends to be flat on most big tubas) is not flat on this one. The notes above the staff are remarkably well-in-tune, and a big fat tone can be produced in the low register, right down to the pedal notes. The B above pedal Bb sounds good with the "false pedal" 2&3, and the C sounds good with 1&2 OR with 1234 and a long slide pull. I vented the first, second, and fourth pistons, and may go back and vent the third as well to make drainage easier. The 4th valve tubing has two slides: You can pull the top one more than 8 inches to make it an "E" or "B" valve, and you can also pull the bottom one more than 9 inches to make it a "quint" valve. (With both slides pulled you can even play "pedal B" with 1234, although 23 is easier.)

I do not claim to be a fine craftsman; I am just a "shade-tree tuba mechanic". A purist will complain that my soldering is a little sloppy, and the braces that I used do not all come from the same manufacturer. But this tuba does not leak and does not rattle. It plays as well as any other 20J, but is far more comfortable and has 4 valves. If I were younger, stronger, and 6 feet tall I would keep it and use it frequently. At 29 pounds it is a chore to lift and carry. But in playing position on a chair it balances nicely, requiring very little effort to hold. Below are three more photos:

The present owner of this tuba has now added a beautiful upright bell made by Kanstul, and recently used it in a performance of Tchaikovsky's 6th Symphony with the New Haven Symphony Orchestra, conducted by William Boughton.

BACK TO THE TUBA-LOGIC PAGE: