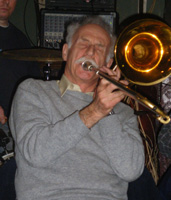 Roy Rubinstein has been playing jazz trombone for over fifty years, first in his native England, then in New York during the 1960s and early 1970s, and in the Chicago area since 1973. His rhythmic style owes much to his favorite trombonists, Kid Ory and Jim Robinson. During his career, he has played with several jazz musicians of note. In upstate New York in the 1960s, Roy and a young Leon Oakley played together before Leon went on to join the Turk Murphy band. In New York City, fellow musicians included Woody Allen, Tommy Benford, Wild Bill Davison, Herb Hall, Freddie Moore, Jimmy McPartland, Joe Muranyi, and Tony Parenti. He was a member the memorable "Southampton, Dixie, Racing and Clambake Society Jazz Band", which for many years kept traditional jazz alive in the former Nick’s in Greenwich Village. For the past three decades Roy has led his New Orleans style Chicago Hot Six in the Chicago area. When not playing trombone, Roy is a nuclear physicist at Fermilab in Batavia, Illinois. For information about two of Roy's recent recordings please click on the images above.